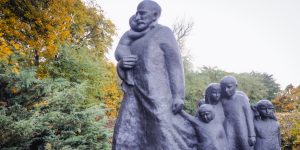 from the desk of Danielah Castellini

Yesterday was Yom HaShoah, Israel’s Holocaust Remembrance Day. Every year, Jewish communities relive the pain of their deep loss on this day with the knowledge that if we do not remember, we are bound to forget. This is a day of painful remembrance not only of the six million lives lost, but also for the moment in time when much of the world chose to be silent.

Yad V’Shem, Israel’s Holocaust Museum, has on record just over 21,000 righteous gentiles who helped save Jews during the Holocaust. Many are familiar with the name Oskar Schindler due to the famous film released in the 1990’s, Schindler’s List. Corrie ten Boom is another famous righteous gentile who hid Jews behind a false wall in her home. However, there are many names who are less famous.

Irena Sendler worked as a social worker in Poland during the war. She saved 2,500 Jewish children by placing them with families or in convents after smuggling them out of the Warsaw ghetto. She and her team had easy access to the ghetto due to their vocation and would also smuggle medicine and supplies in to help Jews survive who they were unable to help escape.

Raoul Wallenberg was a Swedish diplomat living in Hungary during the war. When the Nazis overtook Hungary, he and fellow diplomats were able to negotiate with the Nazis to allow them to extend a special exemption pass to Jews who were working for Sweden. Wallenberg miraculously through a series of creative efforts (such as building houses for Jews that were claimed as Swedish territory in Hungary) had a hand in saving around 100,000 Jews.

Polish Priest Maximillian Kolbe hid nearly 2,000 as part of his efforts to oppose Nazi Germany. The cost of aiding them was his life. He was arrested by the Nazis and imprisoned in Auschwitz where he was tortured and starved. He eventually gave up his life in place of another who was trying to survive the camps to get back to his family.

The actions of the righteous gentiles during the Holocaust were a bright spot of hope in an unimaginably horrible reality. One of my favorite quotes is by Janusz Korczak, a famous author and physician who died protecting the 192 Jewish orphans under his care by choosing to go to the gas chambers with them when he had been offered an escape. “I exist not to be loved and admired, but to love and act. It is not the duty of those around me to love me. Rather, it is my duty to be concerned about the world, about man.”

This quote is reminiscent of John 13:34-35 (TLV), “I give you a new commandment, that you love one another. Just as I have loved you, so also you must love one another. By this all will know that you are My disciples, if you have love for one another.” The survivors and generations after are forever grateful for the sacrifice of the righteous gentiles. Just as the we collectively vow to never forget those who perished, we will never forget those who chose to love like Yeshua loved at a time in history when the world was set on destruction.