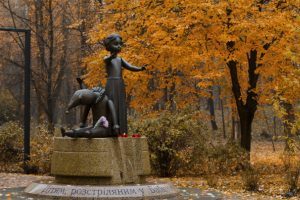 This past week Babi Yar, a Ukrainian Holocaust memorial for 33,000 Jews who were slaughtered by the Nazis, came close to becoming another casualty to Russia’s war in Ukraine. Babi Yar still stands amidst the ongoing fighting as a reminder of a tragic moment in history for the Jewish people. The memorial’s near destruction bears deep symbolism for the historic moment in which we stand. As the famous phrase goes, “those who fail to learn from history are doomed to repeat it.”

As Putin marched his tanks into Ukraine, he publicly proclaimed one of his motives to “denazify” Ukraine’s government. This is deeply insulting to the Jewish people and the memory of over a million Ukrainian Jewish lives that were lost in World War II. At the same time, one wonders why he would choose to use this term to justify this war to his people?

Due to Russia historically being at odds with the Western world, Russian activity in World War II is far less common knowledge than that of the Nazis. Russia ended World War II fighting against the Nazis, but they began the war as Nazi allies. In order to gain additional territory, Russia signed the non-aggression pact with Germany in 1939. The shift in their stance only came after the Nazis decided to attack Soviet territory, thus ending Russian dreams to annex European land. The same way that the trauma of the Jewish people that resulted from World War II did not end with the generation who lived it, anti-Nazi sentiment carried forth in Russian culture and has become Putin’s symbol for resurrecting the Russian government’s empirical vision.

The majority of fighting between Germany and Russia took place in Ukraine and Belarus. Nearly 1.5 million Ukrainians and over 2 million Belarusians were killed between 1941 and 1945. They acted as a buffer to Russia. Today is a similar story in reverse. The Ukrainian and Belarusian peoples are again in harms’ way due to the Russian government’s selfish ambitions.

The images shown over the last week from Ukraine are heart wrenching as we watch families being separated and innocent lives being taken. Overall, we know that the Lord is sovereign over all conflict and war on this Earth. We know that he has the power to deliver the refugees to safety. It is imperative that we as believers press in to intercede for Ukraine and Belarus, for their leaders, for their people, and for the believing communities there.

During World War II the acts of the righteous gentiles saved the lives of thousands. We believe that God is again calling believers to stand in righteousness to save those being oppressed and to intercede for Putin’s armies to be stopped. Please pray with us for our brothers and sisters, both those fighting and those fleeing, Isaiah 40:31, “those who wait on the Lord will renew their strength. They will soar on wings like eagles; they will run and not grow weary, they will walk and not be faint.”

If you would like to donate toward the relief efforts to assist Ukrainian refugees please click on the donate button, then donate now, select or enter the amount you wish to donate, click to select from the box under “Where can we designate your gift?”, and select the last option, “Ukraine Relief”. Thank you for standing with the Ukrainian refugees during this difficult time!