In mid-July Marty Waldman, Brian Cox, and Robert Wolff visited the Navajo Nation. The purpose of this journey was to build the relationship between the Navajo Nation, Indigenous First Nations and TCJII. 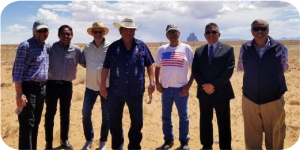 Robert Wolff was invited due to his longstanding relationship with Myron Lizer, the Vice President of the Navajo Nation.

After a series of zoom calls between VP Lizer and members of TCJII leadership, an invitation was made to visit the Navajo Nation. 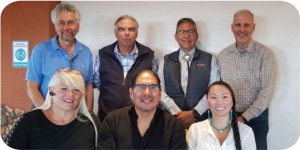 Events on the Navajo Nation were timely and significant. We were joined by Sam Winder, a close friend of Marty’s and were guests at the President and Vice-Presidents’ celebrated, historic public signing of the agreement to finally re-open borders and businesses to their nation in the wake of recovering from the highest per capita Covid related deaths in our country. VP Lizer then joined us in travels around the reservation for the next two days. Day One included visits to Navajo Agricultural Products Industry (NAPI), Shiprock, and a church in Gallup, NM named Joshua Generation for Jesus. There we prayed with a select group of pastors and intercessors to lift the cause of TJCII. VP Lizer spoke and introduced each of us. We affirmed VP Lizer as more than a political leader – as the chosen spiritual leader of his nation.

Day Two, again accompanied by VP Lizer, was highlighted by a trip to the Second Mesa, in the heart of the Hopi Reservation, to sit with Ellson Bennett, his wife Debra, and daughter Callie. We shared our testimonies and observed how the Lord has been moving among those on the Reservations. We made solid connections, prayed together, and shared our vision to see Yeshua’s Body united and restored.

At the conclusion of the diplomatic mission, the TJCII team discussed next steps with VP Myron Lizer. One potential would be a TJCII Consultation among the Navajo Nation which would include: Christian leaders, intercessors and next generation leaders from throughout the nation together with Messianic Jewish leaders both from Israel and the Diaspora. The seeds have been sewn and the ground is being prepared as the Navajo Nation and TJCII move forward together toward greater understanding and unity.