The Watchmen on the Walls by Danielah Castellini 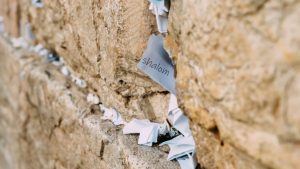 “I have posted watchmen on your walls, Jerusalem they will never be silent day or night. You who call on the LORD, give yourselves no rest, and give him no rest till he establishes Jerusalem and makes her the praise of the earth,” Isaiah 62:6-7.

Jerusalem, the city of peace, as it is translated. No other city in the world provides as strong a sense of both unity and disunity simultaneously. However, we know that only one of those things comes from the Lord. Matthew 12:25 says, “Knowing their thoughts, Yeshua said to them, every kingdom divided against itself is destroyed, and every city or house divided against itself will not stand.” Yeshua admonished believers against disunity.

In 1 Peter 5: 8-9 believers are warned, “Stay alert! Watch out! Your adversary the devil prowls around like a roaring lion, searching for someone to devour. Stand up against him, firm in your faith, knowing that the same kinds of suffering are being laid upon your brothers and sisters throughout the world.”

Jerusalem has gone through many seasons of unrest, and yet by the grace of God the city stands. The city continues to stand through the perseverant prayers of the followers of Messiah as instructed in Isaiah 62.

Every year thousands of prayers are spoken and or written at the Kotel, the Wailing Wall, in the Old City of Jerusalem. Little notes stuffed into every crack serve as reminders of the prayers of the people. The world comes to pray at this wall because it is the closest modern-day individuals can get to where the Temple once stood.

But when we take a step back, it is not just the Kotel that holds the prayers of the people. If the stones of the Old City could speak, thousands of years of prayers would be heard as loud as the storm of a raging sea. Prayers for safety, prayers for healing, and prayers for unity. As we look towards the 2023 High Convocation, we continue in prayer for unity not just for ourselves as a community of believers, but for the people of Israel.

Let us be the “watchmen on the walls” the God has called us to be.