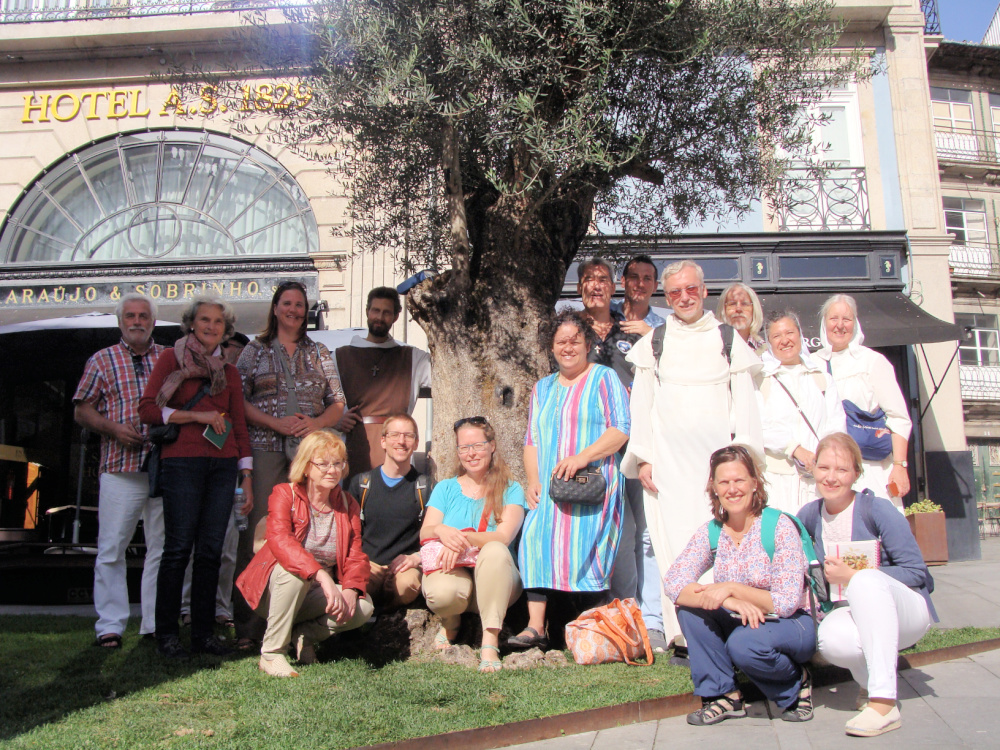 Thank you to all who prayed for us during our first Portugal Prayer Journey on October 21-26.  We truly felt a wall of prayer protecting us.

One of the special aspects of the journey was the unity we felt in our calling to this mission. The purpose of the journey was to learn the history of the Marranos, or Anussim (Hebrew for forced baptisms), to repent for the Inquisition and to look for contacts for future repentance services.  There were 17 in our group: two Catholic priests, a Lutheran minister and his wife, several Protestants, four Messianic Jewish believers and some Catholic leaders.

In Coimbra, we visited the Inquisition patio and excavated underground prison chambers. We could feel the agony and fear that the Jewish people suffered, awaiting trials and death sentences.  We walked to the nearby market place, site of the processions of humiliation where the condemned were burned at the stake. There was no memorial plaque or signs of repentance.

We visited the new Jewish synagogue built about 15 years ago. João, vice-president of the Jewish community shared with us and we noticed a sadness and heaviness over him.  We gave a spontaneous confession and asked if we could sing the Shema (Hear O Israel).  João was visibly touched by our words and the Lord´s presence. João said he had never heard a confession of guilt from Christians.

We travelled to the city of Castelo de Vide (Vineyard Castle). The next morning we went to the bridge where 4000 Jews crossed from Spain into Portugal, fleeing the Expulsion Act of 1492.  More than 100,000 Jews entered Portugal from Spain.

We visited the old Jewish quarter of Castelo de Vide, a blacksmith´s shop and the old small Synagogue which has since been restored and preserved as a museum. We saw the old fountain where the people of the village came to draw water.  We were shocked to hear that this was the sight of forced baptisms.  The Jews received a certificate as New Christians, a new name and were forced to move to another part of town. They lost their names, faith and homes in the name of Jesus!

Lisbon was our last stop. We visited the old Jewish quarter and the new Synagogue which has an active Orthodox Jewish community.  We wanted to know more about the Inquisition and to repent.  We sang Oseh Shalom Bimromav (prayer for peace) which moved some to tears.

We went to the famous Rossio Square, scene of the huge massacre in 1506 where thousands of Jews were accused and burned at the stake.  We circled the Square in silent prayer as if marching with the condemned.  Some of us made a prayer walk around the larger Commerce Square where larger processions took place and where the huge bonfires burned.

There was a beginning of a confession and repentance in Portugal thirty years ago.  The question that continues to weigh on our hearts is…where are the signs of repentance from the Church?

Sister Adola was born in Texas and has been a member of the Evangelical Sisterhood of Mary, an interdenominational Evangelical sisterhood founded in Germany, since 1975. She was one of the founders of the branch of the sisterhood in Brazil and has lived in Curitiba for 38 years, working towards unity and reconciliation in the body of the Messiah. Sister Adola has served in the leadership of TJCII Brazil since 2013.