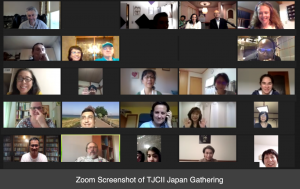 On September 27, the TJCII Japan team held an inaugural “Japan Gathering” online with 60-70 participants. Half the participants were Japanese, and the other half were from abroad. TJCII Japan (international) Coordinator, Melissa U, a Jewish follower of Yeshua with a Japanese husband and three Jewish-Japanese children in Tokyo, opened and moderated The Japan Gathering.

TJCII Executive General Secretary, Rabbi Marty Waldman was the first presenter. He touched on the origins and development of the TJCII vision and how it has grown into a global movement (spreading to 30+ countries) over the course of the last 25 years.

TJCII Vice Regional Director for Europe, Pavol Strezo shared a wonderful report and testimony of the very recent public repentance by the Prime Minister of Slovakia (as an official statement on behalf of the Slovakia government) to the Jewish people for their anti-Semitic actions during WWII. It was clear that the work of repentance and reconciliation that the TJCII Slovakia team had undertaken over the last 15 years or so had paved the way for this remarkable act of repentance at a national level.

TJCII Japan (domestic) Coordinator, Hidekazu I presented about the anti-Semitic and anti-messianic Jewish spiritual roots of modern Christianity due to the Second Nicene Council of 787. It was a powerful and significant reminder for the Church in Japan to be diligent and intentional about addressing these spiritual ties which have influenced Japanese Christianity to this day.

Japan-based intercessor Rachel M taught about the role of prayer in TJCII (Japan) and raised the following specific prayer points for Japan regarding declarations over lies that are spiritual strongholds in the nation.

The Gathering closed with repentance among many of the Japanese attendees regarding their history as a nation and Japan’s historical ties and allegiance to Nazi’s.  Rabbi Marty responded and said he thought this was important and necessary for Japanese people to do. He then expressed forgiveness as a representative of the Jewish people. Rabbi Marty suggested that this moment could serve as “the first ripple” toward bringing the rest of the Body of Messiah in Japan into proper alignment with Israel and the Jewish people.

The day of the event also happened to be the seventh and final day of Sukkot, also known as Hoshana Raba (great salvation) when Yeshua once proclaimed (John 7:37) “If anyone is thirsty, let him come to Me and drink. The one who believes in Me, as the Scripture said, ‘From his innermost being will flow rivers of living water.’” May the LORD’s great salvation be known in all of Japan and may the rivers of living water flow back to Jerusalem one day. Please continue to pray for Japan’s awakening to the heart of God that is expressed in the vision of TJCII.