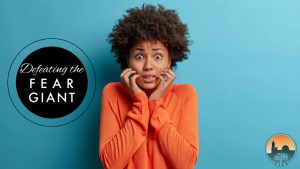 This week’s Torah portion begins in Numbers 13 with the story of the twelve spies being sent by Moses to spy out the land that God had promised the Israelites. The heroes of this story are Caleb and Joshua, the only two of the twelve who brought back a good report. In verse thirty Caleb, full of faith in God’s promise, encourages the people that they, “should go up and take possession of the land, for we can certainly do it.” His proclamation is met, however, with fear and resistance that results in God punishing the people by causing them to wander in the desert for 40 years. Additionally, the Lord states that none of the Israelites who failed to trust the Lord’s promise would enter the Land, save Caleb and Joshua.

There is so much richness to glean from this passage when it comes to the power of our faith and holding steadfast to the promises of the Lord. It contains a pivotal moment in Israel’s history and relationship with God which impacted generations. We know that no matter our struggles that God rewards our faith in His promises. Caleb is specifically called out by the Lord in chapter 14 of Numbers for his great faith and for trusting in the Lord “wholeheartedly,” even under the threat of being stoned by the people out of their fear of the Anakim, or giants, in the Land.

Caleb and Joshua encouraged the people that the giants could easily be defeated because the Lord was with them. Though the Bible does talk about people “of great size” in the Land at the time, the true giants were in the minds of the Israelites. Their inability to move past their fear kept a generation from the good things that God had for them.

How often do we allow our own giants to keep us from the things that God has promised us? Whether that giant is represented by a person, finances, illness, etc, the true giant is actually fear. Proverbs 3:7 says, “Do not be wise in your own eyes; fear Adonai and turn away from evil.” Sometimes the evil we need to turn away from is our own thoughts and ideas by moving past what is seen in order to discern the heart of the Lord.

The message of TJCII, a message of reconciliation and rebuilding community, is a good report in the midst of broken community. There can be great fear when crossing boundaries and border lines, whether between communities or denominations. May we all be empowered as Caleb and Joshua and bring a good report wherever and to whomever the Lord takes us. A report that holds true to God’s love for His people as a whole.